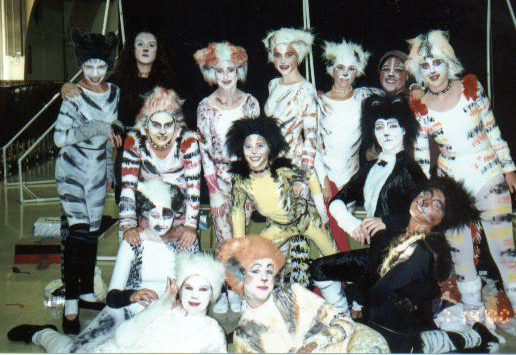 It started after I saw the video production of Cats in 1998 on PBS. I fell in love and wanted to put on my own show. All throughout 7th grade I kept it in my head. I made a group of great friends who were all Sailor Moon fans (I was as well, that's why we got along so well at first.) I showed them Cats and they fell in love. That started our fandom. I told them my idea in about 8th grade and they were into it. We started a cast list, asking our friends who they wanted to be and such. Once the first rehearsal came around we realized more than half the people who signed up were not serous or would not be able to make it. We narrowed our cast down to the essentials (or what we at the time thought were). We wound up with 14 girls. We learned the dances (or what we could manage...none of us being 'great' dancers) by watching the video in a mirror and copying. After months of rehearsals in my garage, and cutting lots of songs from the second act, we were ready. All costumes, set, stage, props, etc. were made a week before our single performance. Our 'set' (build out of PVC pipes and fabric) was too large to fit on stage so we were on the floor and our audience was on the stage. It was a lot for a group of 14-year-olds (and under) to pull off...so we were quite proud. In regards to if I will ever put the video online...(that only caught half the stage...) well...I'm just not sure if it will ever get there...but who knows...

Cast
Missy as Munkustrap, Mandie as Grizabella, Leigh as Bombalurina, April as Etcetera, Michelle as Jellylorum, Taylor as Old Deuteronomy/Bustopher Jones, Caitlin W. as Rumpelteazer, Marie as Mungojerry, Amy (my little sister) as Demeter, myself as Mistoffelees/Jemima, Julie as Alonzo, Rachel as Rum Tum Tugger, Caitlin M. as Victoria, and MOEKitty as Jennyanydots
Click the photos below to be taken to the full set! 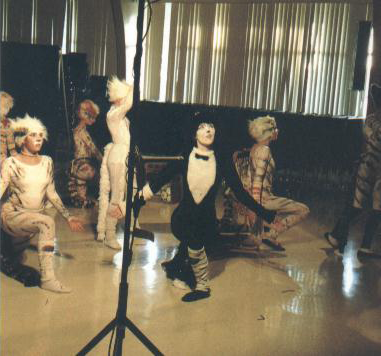