Artichoke is one of the 'friend bands' my boyfriend often plays shows with. They produce wonderful concept-ish albums.  “Historic Highland Park” contains songs all about their hometown.  “26 Animals.” is 26 songs each about a different animal for each letter of the alphabet.  "26 Scientists" (in two volumes) is 26 songs about 26 different scientists for each letter of the alphabet.  “Bees” is a collection of songs...about bees...and it's amazing.  Some of my all time favorite Artichoke songs are Trash Day, Robber Bee, and Cats.

Recently the theremin player, Steve Collins, gained some internet fame due to the fact he works at NASA and was part of the team that landed the rover, Curiosity, on Mars.  He has been appearing in memes as the "Hippy Nasa Guy" after the internet fame of the "Mohawk Nasa Guy"
Look, someone made a Tumblr for Steve!
So cool to know someone a meme was created around. (Much cooler to know someone who helped reach Mars)

Artichoke will be performing at the Geek Acoustic Night at Bar Pico that I mentioned last week. (No Steve though, he's busy being a rocket scientist...) 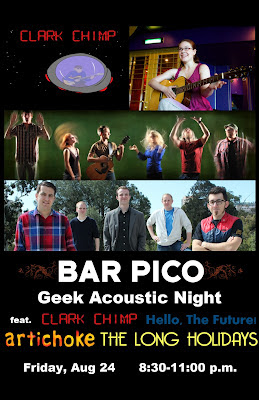 Oh, wow, what an interesting concept! I shall check them out ;).

Hope you're having a fun week! ;D

Artichoke is way awesome. =)
My week has been great so far, hope yours is too!

haha, they are defiantly one of my all time favorites!